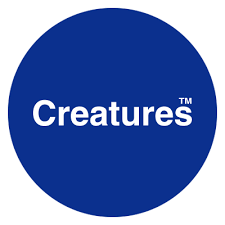 Just as “Create” is in the nature of the word “creature,” creators, creations, and creativity are part of our nature at Creatures. What kind of company does Creatures strive to be? A company where creators live fulfilling lives, channeling their experiences into their own creations. We strive to be a place where creators inspire and nurture creativity within each other, helping one another to grow. I suppose it is those aspirations that make us who we are as a company.

In 2017, although a bit more luxurious than what we’re used to, we decided to move our headquarters to a larger office located in Iidabashi in Tokyo. The pleasantness of the area washed over us, reinvigorating the atmosphere within our company. As we continue moving forward in step with Pokemon, we are committed to pursuing new challenges along the way. This is Creatures Inc., and this is our story.

As one of the licensors of the Pokémon franchise, we are mainly involved in the development of Pokémon products. As a result, our workflow is greatly influenced by the release cycles of new Pokémon titles. Relying on any sole pillar of our business would leave us at the mercy of that one component's ups and downs. The lack of wiggle room creativity-wise would breed an atmosphere where it’s become difficult for new ideas to blossom and take shape. This can be fatal for a development company. Currently, Creatures is supported by three pillars, trading card game development, digital game development, and 3DCG production. Each pillar has a distinct “personality” that I believe directly contributes to the stability of our company, giving Creatures its own distinct personality and characteristics. Furthermore, I feel the three pillars complement each other, creating a synergy at Creatures.

Creatures plans to continue offering services and products that bring smiles to the faces of everyone. To that end, we need people who want to create while enjoying life. Please look forward to what Creatures has in store for the future.

(Creatures is one of the three original companies behind the "Pokémon" series. In recent years, Creatures has produced "Detective Pikachu," "Pokemon Ongakutai," as well as its own original content such as "aDanza.”)

CG Engineers are responsible for general programming related to 3DCG in the development of the main "Pokemon" series and Pokemon-related games. Mainly using Unity, you will be developing shaders and post-effects.

Creatures' Game Development Department is developing Pokémon-related games for the Nintendo Switch, but we are also working on other projects for the future, such as the development of smartphone applications. We develop Pokémon-related games and applications while working with other teams such as planners, designers, and engineers in charge of sound. There are many opportunities to be involved in planning, and you can create games while proactively sending out your ideas. Creatures' CG engineers also create the 3D data for the full-length Pokémon games. In addition to the games that Creatures plans and develops, the fact that you can be involved in a wide range of fields is another attraction.

Projects
・ Pokémon-related games such as the Pokémon Ranger series, the Poké Park series, and Detective Pikachu
・ Smartphone applications such as "Oodoru? Pokémon On-Gaku-Tai,” "aDanza,” etc.
・ Web applications used within the company or group

About Working at Creatures
At Creatures, each creator is proactively involved in the planning and development of the game, and CG engineers also have a lot of contact with the planners, so they can actively contribute ideas to the game planning and development. CG engineers are required to absorb differences between platforms, consider execution speed and ease of development, and have a variety of other knowledge requirements.

Since we deal with the highly popular Pokémon content and have a business base other than digital games such as Pokémon card games, we can face the challenge of creating games in a stable environment. There is no excessive overtime work, and compared to other game companies in the industry, the culture is more relaxed, and there are few shifts in development policy based on business performance.

Our development environment is one of the best in the industry. Octa-core CPUs, 32G of memory, 2TB of SSD, and high-end graphics boards are the standard specs, while keyboards, mice, 2K dual displays, and notebooks are available at the company's expense if needed. Many people bring in their own personal equipment that they are used to using.

Team Structure
There are 16 members in the programming team of the Game Development Department.
The team consists mainly of digital game developers, including game programmers, server-side engineers, and CG engineers. (As of April 2021)

Please sign up for the Japan Careers Program to apply to this position and access our free job search services.

This is not a JCP Verified position. You will be redirected to an external website to apply.
‍
Make sure to mention the Japan Careers Program in your application!

(Please note that we cannot guarantee positions that are not JCP Verified.)